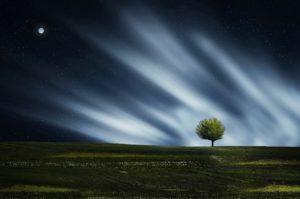 The sleep state is one of the most important stages of our daily physiology. We need sleep so much that it takes up a third of our lives and when we don’t get enough, we cannot concentrate, we make cognitive mistakes, we become irritable and we suffer psychological consequences. Sleep involves leaving the conscious state and entering into unconsciousness that lasts about 7-9 hours of the day, excluding occasional trips to the bathroom in the middle of the night. Restful sleep involves a prolonged period of inactivity, when our bodies don’t move much; we generally lie down when we sleep and we usually sleep with our eyes closed. External stimuli aren’t always picked up while we are sleeping, especially when we are in a deep sleep. When we awaken, we should ideally be refreshed and should be dimly aware that some time has gone on during our sleep time. This is the difference between “sleep” and going under anesthesia, for example. When we sleep, we feel like time has gone by while we were unconscious and when we are under general anesthesia, we feel as though no time has passed since we were last conscious. Sleep is associated with changes in our brain waves that are particular to the sleep state.

What physiological changes happen when we sleep?

Sleep affects our entire body. There are specific physiological changes that occur in the body that help us define what sleep is and what it is not. These are some changes we exhibit during sleep:

Sleep and the Mind

Our brains do not turn off during sleep and they still function to some degree, allowing for dreaming in both REM and non-REM sleep. Sleep is a time when memories are reinforced—particularly memories of the previous day. It is believed that, in some cases, the brain “replays” what we’ve recently been doing, laying down neuronal pathways that were started in the waking period. If you have been trying to learn a language or how to play an instrument, sleep helps these areas of the brain become more active so that the memory you are trying to force during the day happens more naturally while you sleep. Both motor (movement) centers and cognitive (thinking centers) of the brain can be activated while we sleep, depending on the situation. During the day, our senses receive a great deal of input, some of which we integrate while we’re awake and some of which are completely ignored. While we sleep, the sensory information is “taken out” again and prioritized. Those sensory inputs that are unimportant are downscaled so we retain only those things that are important to remember. The other neuronal pathways—those of unimportant things—are “cleaned’ out of the brain so we don’t suffer from brain overload. During the slowest period of brain activity, we sort out the important things and let the synapses or connections in the brain that are unimportant fade away.

Sleep can reinforce the negative emotions we feel during the day, causing changes in the brain chemistry that facilitate depression. While we can feel strong, unhappy feelings during the day, the feelings can turn into biochemical changes in our brain at night that bring on depression. When we take anti-depressants for depression, we raise our serotonin levels and correct innate imbalances in REM sleep that are found in depression. On the other hand, allowing our brain to process negative emotion during the sleep state, we can either reinforce the depression or help it dissipate. Anti-depressants cause a reduction in REM sleep so we dream less and the forces that bring on depression are lessened.

How can another person tell that you are really sleeping? Scientists now know that sleep has its own characteristic brain wave patterns that can be detected on an EEG or electroencephalogram. An electrooculogram (EOG) is another tool used to define sleep. Doctors can perform these tests on anyone to assure that the unresponsiveness of a particular person is due to the natural sleep state or to something else. Sleep is a necessary part of life. While there is still a lot to learn about the sleep state, doctors and scientists know that we function better when we get enough restful sleep.